Well I had to kick off the SEC section with something, so why the fuck wouldn’t I start with the sport we dominate in. Oh it’s June you say? Well we’re in the south there is no off-season for college football talk so suck it. Oh, and this isn’t specifically going to be a preview or prediction about the upcoming season. It’s mainly going to be a blog of what I and many others in the south think about the teams that make up the most supreme conference in America.

These Mothafuckas!! The team everyone in the country, not just the SEC, LOVES to fucking hate. SEC schools hate them because of their extraordinarily retarded and redneck fans. The entire country hates them because of Nick Saban and their recent dominance. Well whatever the reason is, fucking hate them. I get so god damn tired of hearing “Roll Tide”. I was hoping and praying Saban was going to make the move to Austin after last season just so the Crimson Tide would fall back into mediocrity like they were pre-Saban. I’ll tell you what though, I’d take 3 National Championship in the last 5 years to be hated by everyone in the county. 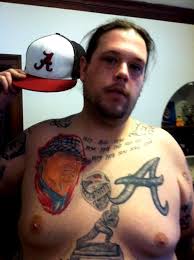 It’s too bad for Arkansas fans that Bobby Petrino couldn’t keep his dick in his pants. After only 1 season with, one of the BIG10 best coaches in the last decade Bret Bielema, the Pig Sooie faithful as wanting to ship his fat, sloppy, high and tight ass back to the land of cheese. I bet most Arkansas fans would let Petrino smash their wives or daughters to get his slimy ass back. Sucks for you Razorbacks. Enjoy watching Bama, Auburn, LSU, and A&M battle for the SEC West title for the next FOREVER.

War Damn Tigers…I mean Eagles…I mean I hate you too. I have several reasons though. The main reason is they are the other team in the Deep South’s Oldest Rivalry (which by the way is one of the most underrated rivalries in college football, Auburn 55-54-8).  The fans are annoying, they try and claim championships that aren’t yours, they absolutely pay players, and they have multiple mascots. Auburn is going to be contenders in the SEC though as long as they have Gus Malzahn. No DC in the country wants to try and figure that offense out. War Damn

Team I personally hate the most. And I fucking hate them. And I love it they are sucking fucking donkey dick right now. And I don’t care how much you won with The Ol’ Ball Coach or Jesus Christ himself, Tim Tebow. Chances are Muschamp will be a D Coordinator for a team next year. I hope they keep him around so they’ll keep having average years. I love it when the Jean Short wearing Gator fans are hating their lives.

My Team. I Bleed Red & Black. Fuck all others. Sorry Ole Miss but we got the Hotest Chicks. GO DAWGS!!

Kentucky has a football team?

I’m gonna be honest. LSU is the only other team in the SEC that I halfway like. Great fan base who travels and loves to party win or lose. One of the loudest and most intimidating home fields in the country. A head coach who needs a reality TV show. And a perennial contender for the SEC and National Championship. Ok I’ll quit jerking them off and move on to the next.

Don’t and Can’t have much bad to say about Ole Miss either, although they have some good young players. One, they don’t contend. Two, they have The Grove. Three…

The other Bulldogs. The one no one knows or cares about. I mean they are the little sister school in the state of the armpit of America. Starkville is a shit hole and no one wants to ever go there. But hey…MORE COWBELL!!

One of the 2 rooks to the league have had a surprisingly good first two seasons. Not sure what future hold for them other than they will always be known for Michael Sam. Not a bad thing, but not what I want to be known for in the best conference in College Football.

Thanks to the Ol’ Ball Coach the COCKS are no longer the ugly bitch at the wedding posted up next to the bar alone, they are a consistent Bridesmaid. But every year they keep dreaming and praying every night they they will be the Bride next. I think they had their best shot with Shaw, Clowney, crew the past few seasons. Looking forward to a lot of this from Spurrier this season. Never gets old.

I could usually give a  good god damn about the Vols. Wish Kiffin or Lil Dooley were still leading the team. Yes because they sucked but more so because they are starting to make me nervous. Living in Tennessee I get to hear ALL ABOUT THEM. But I get it, I’m in your back yard. Butch Jones is going to be around for a long time and the Vols future looks pretty bright with him as the Head Coach. I almost had a fucking heart attack last year in Neeland when Georgia heavily over matched UT and barely pulled it off. Appreciate that “Pig” Howard. Even though they are probably on the rise again, I still want to kill every person wearing that ugly ass orange every time they play Rocky Top. Worst Song Ever!!

The other newbie to the league. Yeah I jumped on the Johnny Football bandwagon. Hell somebody had to beat Bama and Auburn. And Johnny Fucking Football was awesome to watch. He obviously put A&M on everyone in the SEC’s radar quick. Kevin Sumlin has done a great job riding his dick too. He’s striking while the iron is blazing too. Lost a lot to the draft (3 in the 1st Rd). So we’ll see how they recover after Johnny Football ran through that bitch. And that bitch, and that bitch, and your bitch.

Oh poor Vandy. At the bottom of this list and HISTORICALLY at the bottom of the SEC. James Franklin came, he saw, he played some good football games, and HE GOT THE FUCK OUT. Anyone who though James Franklin who stay around until they changed West End to James Franklin Blvd is smoking that good shit. Don’t know how many people actually thought that but living in Nashville I’m not making that up. Not only did he get the fuck out, he took everyone and everything with him and packed that shit up in a Penn State moving truck. I mean damn why don’t you kick their dogs when you leave. With a new coach and a depleted team, it might be a while before Vandy plays like the past 2 seasons. That’s cool though, I can get cheap ass tickets when a good SEC team comes to town during UGA’s bye week.