Every time I come around your city bling bling. DAMN!! Not gonna lie, I’m jealous those aren’t Georgia G’s instead of Alabama A’s. That’s some serious hardware. I’m really thinking about going back and changing my TOP PLAYER FROM EVERY SEC SCHOOL IN BCS ERA pick. Mark Ingram didn’t accumulate that many rings.

On the other hand…has there ever been an Auburn Grab slapping her Alma-Mater in the face more than this? She couldn’t step on campus if she was walking down frat row in her birthday suit. Kind of glad she’s covering her face though. Seen about enough of her. Glad the BF will be holding a clip board for a few years so they can fade away like Speidi.

Ever Wonder What 51,000lbs of Burning Weed Looks Like?

ABC – A five-day raid on a lawless southern Albanian village which netted huge amounts of marijuana and heavy weapons shows the government’s determination to tackle drug gangs, the prime minister said Friday. About 800 police besieged the village of Lazarat for days, coming under fire from guns, rocket-propelled grenades and even mortars before being able to move in. Police arrested 15 people; one policeman and three villagers were injured during the battle.  “State police destroyed the 20-year-old taboo of a crime zone that had declared itself a separate republic and turned it into a stamp of shame for Albania,” Prime Minister Edi Rama said in the capital, Tirana. Rama’s nine-month-old government has declared its determination to tackle the drug gangs as part of the country’s efforts to gain candidate status for entry into the European Union, which has been rejected three times previously. Smoke from burning marijuana hung above the village Friday, the first day without gunfire since the raid began Sunday night. Authorities said they had destroyed 25.4 tons of marijuana, 91,000 plants and four drug-processing laboratories after searching 162 houses and other buildings. In one home, police found a ton of marijuana in a water tank in an underground storage room.

NO!!!!!!! MY PRECIOUS!!!!! Well thats a party foul if I’ve ever seen one. Those Albanian Sons of Bitches. Maybe instead of burning all that weed they should have passed it out to all Albanians. That would halt the violence for at least an hour or two. I guess technically they got the entire country blazed out of their minds. That’s one hell of a contact high. I’m willing to bet Albania sold more Cheetos and Ice Cream that day than ever before. Oh your weed man is dry? Just walk outside for a few minutes, that’ll do the trick.

Suck on that Blake Griffin

Who said white men can’t jump? Nah that shits mostly true. Definitely in my case. I’ve got the vertical of a fucking pickle. But this white boy just showed some HOPS!! Dude jumped over the TOP of the fucking car, not just the hood like Blake. I wish the NBA would let these guys off the street compete against Pros in the Dunk Contest.  Doubt that’ll ever happen though cause those pussy ass premadonna’s are too scared to get shown up by and average 6′ white boy. 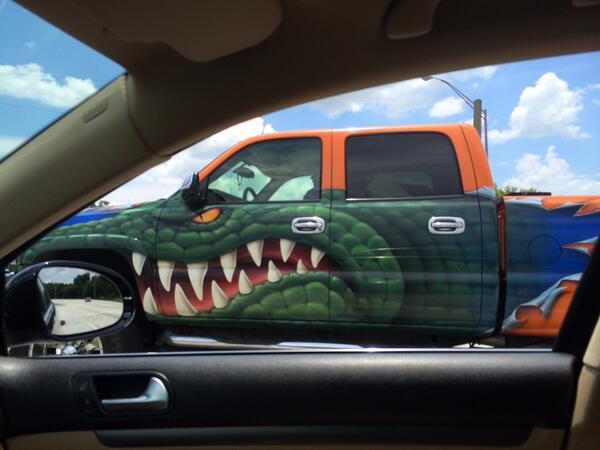 Sweet ride brah. That thing got a hemi? No, just a douche of an owner. Of Course a Gator Fan has a truck like this. $100 says he gets out of the truck and looks like this. Gator Fans make it so easy to talk shit. I’m sure every SEC school has some dick head fan who has a custom truck but this is so typical for a Gator.

Is anyone shooting up the NBA draft board more than Zach LaVine? The answer is NO. Kid is a pre-draft workout FREAK!! He’s my sleeper pick of the draft but I’m pretty sure the secret is out with all these mixtapes. His game is a combination of Jesus and Fergie. No, really though Russell Westbrook and Jamal Crawford. And to think he was UCLA’s 6th Man. He’s gonna be pretty exciting to watch if everything pans out for him. I see a lot of SportsCenter Top 10s in his future. BALLIN!!

College Spun –  SEC Network announcer and Sirius XM radio host Tim Brando released his annual college football preseason top 10 list today, and has a surprising team listed at No. 1 overall: the UCLA Bruins. Other than that, his top 10 isn’t too surprising, other than maybe leaving Alabama out of his top five, as the Crimson Tide are Brando’s 7th-ranked team in the nation.

What is surprising is what Brando thinks will happen after the season. Along with his preseason top 10, Brando also picked the four teams he think will participate in college football’s playoffs. They all have one thing in common: none of the teams he selected play in the SEC.