Click here to see how America reacted to today’s GOOOOAAAALLLLS vs Ghana.

US Wins World Cup…or at least they scored the 1st GOOOOAALLLL!!!

It only took 30 seconds for the USMNT to give the country Soccer Blue Balls.

Who Needs a Stash House When You’ve Got Fat Rolls?

AJC – A 450-pound Florida man was arrested Friday after he hid drugs between his stomach’s fat rolls, deputies said.A Volusia County sheriff’s deputy originally pulled over Christopher Mitchell and Keithian Roberts on State Road 415 in Osteen because Mitchell didn’t appear to be wearing his seat belt. Mitchell told the deputy he was too large to wear a seat belt. The deputy, however, noticed both men “acting nervously,” according to reports. A drug-detecting K-9 was brought to the scene. The deputy found cocaine and 23 grams of marijuana hidden underneath Mitchell’s stomach fat, a handgun, and more than $7,000 cash stuffed into a tube sock, according to sheriff’s reports. Roberts was charged with possession of cocaine, and Mitchell was charged with possession of marijuana and cited for not wearing his seat belt. The bust was part of a bigger crime detail in the area, deputies said. The operation led to nearly two dozen arrests for drugs, speeding and other offenses.

Can’t knock the hustle. Shit, I’m sure big boy didn’t think some cop was gonna go mining through his fat rolls to find the stash. I’m willing to bet he didn’t even know his stash was there. He probably said to himself “oh there’s those dime sacks”.  For the rest of us, it was probably like finding a $2o bill in your laundry, except the whole going to jail aspect. And did I read it right that he was pulled over for not wearing a seat belt? Yeah no shit he wasn’t wearing a seat belt. He can barely fit into a car let alone fit a seat belt around his big ass. Not like he’d go flying through a windshield.

My mind is still blown that he could fit some blow and nearly an ounce of bud under his fat rolls. I’m guessing they found a shoe, 5 chicken leg bones, and my cat that went missing when I was 8 but that wasn’t quite “news worthy”,

I always enjoy this segment from Jimmy Kimmel. I wouldn’t say this is the best one I’ve seen but still pretty funny.

Mr. Bailey hit the nail right on the head when he said “it’s not the system, it’s the kids”. This is big time DI football. This is a way to get better as a player and a person and potentially make millions of dollars for you and your family. You have a job to do and if it’s not done then you get fired, just like real life.

Listen, I don’t have a problem with these kids leaving at all. Honestly, good riddance. If you want to be a knucklehead and dick around in practice, cuss out your professors, and break the law then I would rather you be at Auburn or Louisville. Yeah I get it, Georgia is always having kids get in trouble, but so is nearly all the other SEC schools. Whats different is we punish them by either suspending them or giving them the boot. We don’t bring in kids that have been kicked off other programs.

Hopefully Matthews blows a couple games for Auburn the next few years like he did for us last year. KNOCK IT DOWN!! 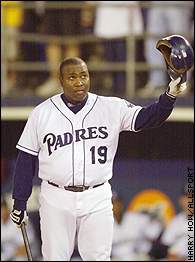 We try and keep things raw and funny here at Bad Grammar Sport. But when the sports world loses a guy like Tony Gwynn, especially at the young age of 54, we gotta keep it real. Everyone who knows anything about baseball knows Tony was one of the BEST hitters the game has ever seen. The only time he hit under .300 in a season was his rookie year when he played in 54 games (he still hit .289).  He hit .394 in the strike shortened season in ’94. He never hit over 17 home runs in a season. He had 3141 hits over his 20 year career. And I think the most impressive stat is he struck out only 434 times.

What I loved most about Tony is that he was one of the good guys that played the game the right way. We know damn well he never touched steroids. I mean dude put on a ton of weight throughout his career but that was fat, not muscles, and he still raked the ball day in and day out. Tony is up there right now with a fat ass dip in his lip slapping the ball through the 5.5 hole